It’s historical fiction time! I first picked up a Ken Follett book in a secondhand bookshop when travelling through Nicaragua. I was looking for a big thick saga to read by the pool and Pillars of the Earth ticked all the boxes. Follett has been a guilty pleasure ever since.

Edge of Eternity is the latest Ken Follett novel, the third in his Century series, continuing to follow families in Russia, Germany, the UK and the US from 1961 to 1989. This is another doorstopper of a book, running over 1,000 pages (yay Christmas holidays, otherwise this would have taken me months to read) but there’s an awful lot of history crammed inside.

I was entertained right to the end, keen to see how the characters reacted to the events of 1989, considering a significant amount of the book was set in Eastern Europe. These sections were particularly interesting to me. However Edge of Eternity is weaker than Follett’s previous novels. Many characters were thin with the focus more on the historical details. Tania, the Russian journalist, was one of the exceptions and Maria Summers, the African-American bureaucrat. Although at the end, Maria’s regrets had my feminist alarm bell ringing. I was also surprised there was no mention of Chernobyl, although I guess Follett could not have included everything, otherwise it would be a 2,000 page book.

All in all, not as good as Pillars of the Earth or Falls of Giants, but still entertaining enough to keep me gripped for 1,000 plus pages. 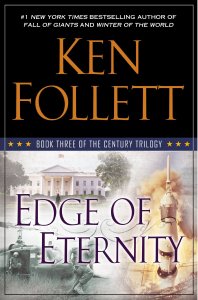 How I deal with the dreaded feedback

What I learned about writing in 2014