I’m a bit late to this party but The Rook is a highly awarded book which I thoroughly enjoyed. The travesty is I picked it up from a local second hand book shop in the $2 bin. Bargain for me, but such a shame. Worth every cent!

The Rook is an urban fantasy set in modern day London. Myfanwy Thomas, a high ranking official in a secret paranormal government agency, has regained consciousness, she has two black eyes and no memory of who she is. Luckily she has letters in her pocket from herself, explaining what to do next.

In a similar vein to Ben Aaronovitch (but can I suggest maybe better?!), The Rook is funny, weird and richly imaginative speeding along with gripping action and bizarre monstrous characters.The world of Myfanwy and The Chequy is so vivid and well detailed, I can almost picture the television series.
Hunt this one down and immerse yourself in Myfanwy’s world. When’s No.2 coming out? 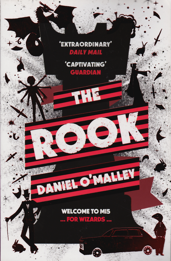 And in other news…..I win

In my writing life, nanowrimo, writing

In dilemma, my writing life, tools

Today’s writing dilemma…should I write for a specific audience or write for myself?

In my day job, I’ve been a product manager for ah-hem years. Rule #1 being – know your customer and develop a product to meet your customer’s needs. For years I’ve been analysing and getting to know my “target market”.

But when it comes to my writing, I don’t really know who my target audience is.

I’m writing a book I’d like to read and couldn’t find. In the wise words of the incredible Toni Morrison….

If there’s a book that you want to read, but it hasn’t been written yet, then you must write it.

But then I’m busting another rule of marketing – don’t market to yourself. Cos that’s a pretty small market. I’m not going to buy my own book!

This is today’s dilemma…how do you approach your writing? Do you have a specific audience in mind or do you write to interest yourself?

In my tips, my writing life, nanowrimo

It’s almost the half way point of Nanowrimo. Can you hear the constant clatter of fingers on keys and foreheads banging against desks?

Time for a bit of reflection. What have I learnt from Nanowrimo this time round?

I’d like to get to know my fellow Nano-ers, visit the message boards and attend the local events, but I’ve got a full-time job and only a limited time to squeeze in my 1667 words per day. There’s no room left for the community stuff. Sorry.

And in other breaking news, the sky is blue and the sea is made of water. Everyone knows it’s hard. Some days, it’s all picnics, unicorns and rainbows. Other days, as I tweeted, it’s like extracting an oddly shaped nobbly object from my arse. The lesson is persistence.

My Nanowrimo project is book 2 of my Monolith series. So, I already know my main characters and my world inside out. This saves time, I don’t need to stop to think how they react or their motivations. I’m visiting old friends. This feels a bit like cheating, but in a good smug way.

There’s drilling, sawing and tradesmen all around me. I’m writing from a space at the end of the kitchen counter next to the fridge. If I can write in this mess, I can write anywhere. Headphones are a wonderful device. I don’t need a perfectly decorated writing room with the inspirational view to get my project out.

What have you learnt from your Nanowrimo so far?

My Notorious Life by Kate Manning is the tale of Axie/Ann Muldoon, an Irish immigrant child from the slums of New York.

Opening in 1880 with Ann using a tragedy as an opportunity, we follow Axie back to her humble beginnings , starving and cold, begging with her younger brother, Joe and sister, Dutchie as her mum lies ill in bed.

The story follows Axie/Ann throughout her life as she taken to an orphanage, is moved out West to find new families and eventually finding her own occupation.

Ann begins to help women with their fertility, in a time when men had begun to usurp the role of midwifes. She eventually becomes the Notorious Madame DeBeausacq, controversial and wildly successful purveyor of remedies for women’s health.

Axie is lively and spirited, inspirational and tragic, a successful woman never forgetting the streets where she came from with a dogged devotion to her family.

I found this novel compelling and heart breaking, particularly the backdrop of the world of women’s health during this period. The men who sought to demonise the ancient craft of midwifery and the women who helped others, assisting with births and providing remedies to prevent/promote pregnancy.

An interesting historical read about a controversial business woman. Recommended.