Bloodwood, my new Australian-set vampire novella, is coming out in October 2020.

How do you fight a vampire… in Australia?

Nothing interesting ever happens in sleepy, rural Ludwood. Not until undertaker Shelley sets up shop with her eco-friendly burials.

Her latest funeral, farewelling an environmental legend, was meant to help her struggling business – even the gatecrashing priest condemning her heathen ways didn’t damper her spirits. Much.

But when frightening screeches wake Shelley in the middle of the night days later, she finds an empty grave and things start to go wrong. Horribly wrong. Like vicious attacks in Ludwood wrong.

Were the priest’s protests of blasphemy right? Has Shelley unwittingly unleashed the undead and reduced the headcount in Ludwood instead of reducing their carbon footprint?

And where does Shelley even start? There’s no manual for hunting vampires in the bush.

Over the past few weeks, I’ve been taking a course run by the fabulous Sandra Ireland – Finding Creativity Through Folklore.

Ordinarily, Sandra’s courses are run face-to-face out of Dundee but due to the COVID-19 crisis, the course has moved online. Which is brilliant for me on the other side of the world, because now I can participate.

Each week, Sandra circulates materials on a folklore theme with prompts for creative projects. The themes to date have included water, trees and family stories.

Rather than writing novels or novellas (which is my usual comfy place), I’ve been playing with visuals and poetry.

In addition to the prompts, we have a weekly Zoom where the group discusses folklore and creativity. I’ve been blown away by the stories and creativity of my course-mates and look forward to the call each week.

The origins of ten common superstitions

I’ve been writing a series for Folklore Thursday on the origins of common superstitions and the series has come to an end. Boo. It’s been a fun and fascinating project to delve into why and where these superstitions came from.

Here are all ten articles for your reading pleasure

“Write something for yourself.”
“It’s part of the writer’s job to read widely.”

END_OF_DOCUMENT_TOKEN_TO_BE_REPLACED

“Bringing magic to the mundane”

END_OF_DOCUMENT_TOKEN_TO_BE_REPLACED

#03 – Angela Slatter – Write Through The Roof

END_OF_DOCUMENT_TOKEN_TO_BE_REPLACED

Episode 02 with Molly Ringle: writer of romance with a magical twist

“My writing tends to be on the weird side.”

END_OF_DOCUMENT_TOKEN_TO_BE_REPLACED

Sometimes all my writing efforts land at once and it’s been one of those weeks.

Not only did the new adventure Evangeline and the Mysterious Lights (and the new collection The Antics of Evangeline) go live, but I had articles published on Roads and Kingdoms, and FolkloreThursday.com.

For Roads and Kingdoms, I wrote about my own private Albanian breakfast and reliving holidays through food.

My Own Private Albanian Breakfast

For FolkloreThursday.com, I continued my series on superstitions with ‘opening an umbrella inside’.

Sky Goddesses, Spring Mechanisms, or Sprites: Why Is it Bad Luck to Open an Umbrella Inside?

And coming later in October, I’m launching my writing craft podcast ‘Write Through the Roof’. The process of learning how to produce a podcast has been surprisingly fun and I’m reminded of how I used to play ‘radio stations’ with my cassette recorder in the 1980s. It’s reinforced the theory that your passions lie in the things you liked to do as a child.

And don’t forget if you like the Evangeline stories, please vote in the Christmas story poll. At the moment, it’s neck and neck between three side kicks!

What superstitions did your Gran or Mum hand down to you?

With my writing and research for Folklore Thursday, books I’m reading and ideas for a new story knocking round my head, I’m in a real folklorish and superstition-filled place at the moment.

My mum passed a few superstitions down to me. No shoes on the table, no open umbrellas inside and cutting crosses in brussel sprouts. So now, I’m curious what superstitions and folklore traditions other people inherited and still follow today.

I put a question out to the Folklore Thursday community

Here’s a summary of the responses…

END_OF_DOCUMENT_TOKEN_TO_BE_REPLACED

Agnieska lives in a village deep in the Wood, where an ageless hermit Wizard called the Dragon lives in a white tower nearby. The Wood is no ordinary forest, twisted and enchanted it takes people, including the Queen who disappeared in the Wood twenty years earlier and over the years, the Wood has gobbled up entire villages.

END_OF_DOCUMENT_TOKEN_TO_BE_REPLACED

Where we’re from, the birds sing a pretty song : rewatching Twin Peaks

While suffering a day of serious procrastination, I binge watched a bunch of Twin Peaks in a row and so messed up my plan for reviewing episode by episode. (Damn you Resistance! You got me that day but I’ve bounced back to get you. See here for more of my battles with Resistance.)

On that Sunday, I let Resistance get the better of me but who doesn’t love a guilty lazy afternoon on the couch? Especially watching something as clever, funny, spooky and weird as Twin Peaks Season 1.

END_OF_DOCUMENT_TOKEN_TO_BE_REPLACED

What exactly is a Bunyip?

For all of you non-Australians still wondering what a Bunyip is, I wrote a piece for FolkloreThursday.com on Bunyips, exploring the folklore and the blurry details of the mysterious Bunyip. 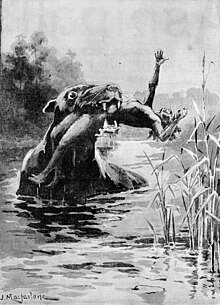